JUNE 18 – JUNE 30, 2015
Two of my classic summer watercolor pieces were accepted for this show:

Marcia Gilson and Robin Baker hosted a Vintage Release Reception celebrating the first in their new Artist Series of fine wines (label designed by me!)  An exhibition of my sketchbooks titled “Road Trip” appeared in conjunction with the release April thru mid-June, 2015.  It was a solo show of my recent sketchbooks and some plein air framed pieces.  Prints and cards from the newest vintage “BFF” Wine Label were also available for sale.

International Biscuit Festival Art: my mixed media painting “It’s Biscuit O’Clock” $300 was featured at the Emporium Center Gallery thru May, 2015.

Call and Response 2014/15 “Opposite Attract Friends” 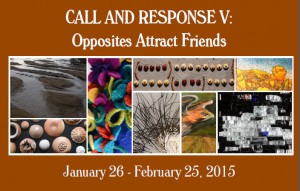 Another wonderful show with my friends from Call & Response PLUS many guest artists!  Here is my discussion of my “Call” piece on this blog:  https://www.gallerynouveau.biz/index.php/2015/01/call-and-response-raptor/

I had three pieces showing in the Giustina Gallery at OSU, in a juried show that complemented the fiber art show there.  Here’s one of the pieces, part of my new “Change” series – watch for more info about the series soon! 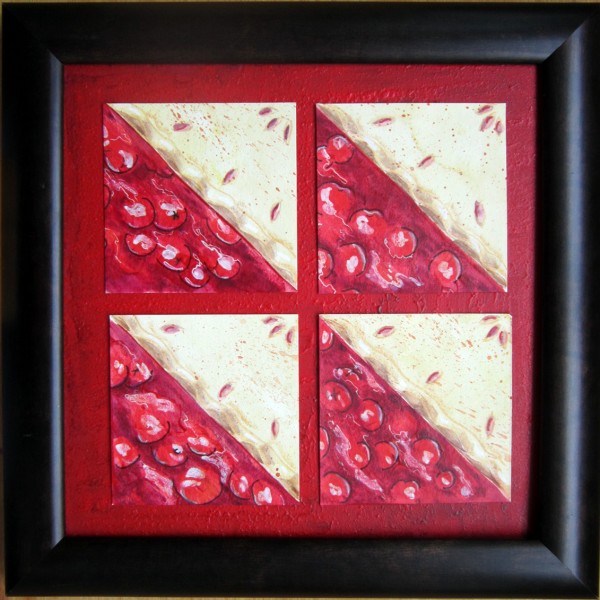 We (Call & Response) were interviewed by April Baer of Oregon Public Broadcasting about our Call & Response show last September.  The full interview was aired in early November 2013 on OPB radio, and here’s a link to an article based on the interview!

We were invited back to the Giustina Gallery at LaSells.  Reception was Thursday, September 5, 2013, 6:00 – 8:00 p.m., Gallery Talk at 7:00.
We all finished all 8 (EIGHT) of our pieces for this show, we “revealed” them to each other, and once again felt like it was Christmas in July – each response always feels like a gift from the Responder.  So much thought and care goes into each one, and the synergy is awesome in the real sense of the word when we see them all together.

Call and Response “And Then Some” 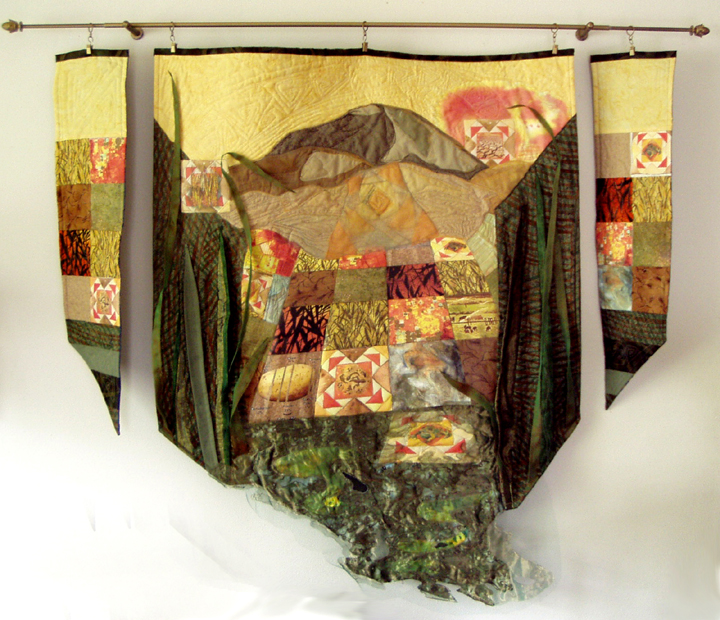 “No Matter How You Slice It”, mixed media textile by Kerry McFall

This show featured all eight of the Call and Response Group and showcased our individual works, not our usual format but it did show off the wide range of talents in the group!  My personal showcase includes work from as far back as 2002, all the way up to last week, and I’ve got some of my sketchbooks open to favorite sketches also.

The “Sharing Space: Selected Work from Fiber Arts Groups in Benton County, Oregon” exhibit was hosted in conjunction with a unique symposium Monday, October 29 – Saturday, November 3 at the Downtown Initiative for the Visual Arts (DIVA) in Eugene.  The Symposium is organized by CultureWork: A Periodic Broadside for Arts & Culture Workers and the Center for Community Arts & Cultural Policy at the University of Oregon.  I was invited by curator Liz Hoffman to show “Don’t Panic” as representative of my work with Arts in Healthcare for the Corvallis Arts Center – “Don’t Panic” is a collaboration with mosaic artist Ella Rhoades and spraypaint artist Ben Jay.

The Giustina Gallery featured art about Oregon’s rivers and waters November 5 through December 19, 2012.  Two of my works were chosen for the exhibit, Mariner’s Compass, a classic Kerry from 2004, and Typhoon, a piece completed in 2007.  I wish I had a finished piece based on my dead fish sketch recently made at Finley Wildlife Refuge… but it wasn’t done, so I couldn’t submit it.  Based on how many of my works feature fish, and how many shows are interested in such topics, it will have a chance somewhere else I’m sure. 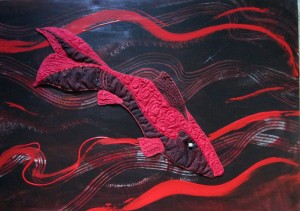 The Giustina Gallery at LaSells Stewart Center, Oregon State University campus, welcomed back the Call and Response show for the month of June. 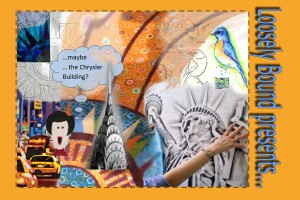 Loosely Bound, as part of Quilt County 2011, showed recent work including “New York Beauties” at the OSU Memorial Union gallery during September, 2011.  Below is one of the postcards I designed for the exhibit, featuring the works in progress and  “thought bubbles” as we prepared for the show.

“Don’t Panic” and other works

Exhibition at the Majestic Theater Lobby – June, 2011
Corvallis, OR  97330
featuring the work of Kerry McFall and selected Collaborators:

Exhibition with Loosely Bound, May 2011
at Fabric of Vision
Ashland  OR

Art in the Garden – Private Sale

An exhibition featuring the art of Loosely Bound from Corvallis and High Fiber Diet from Eugene.  Member Artist, Feb 25 – Mar 25 2011.

“Art and Soul: Arts in HealthCare”