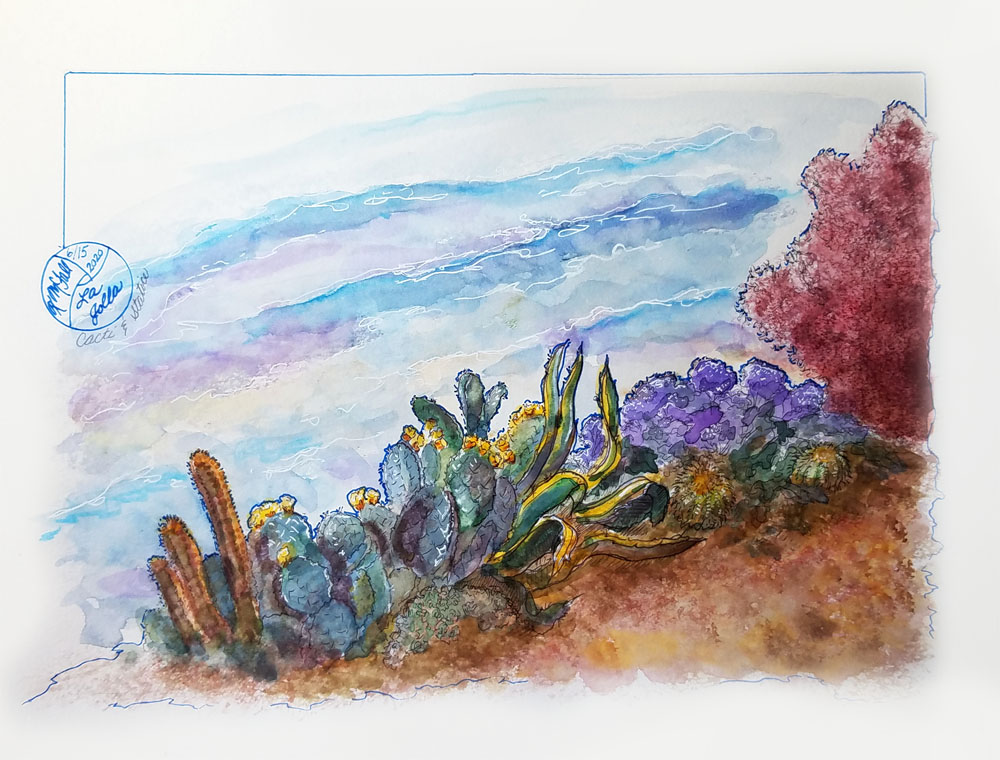 The elegant homes on the cliffs at La Jolla near Bird Rock are teetering – literally – on the sandy edge of foaming, crashing waves.  To say that anyone with an ounce of common sense would never have built any kind of structure there is an understatement.  But I love the tiny “pocket parks” that have somehow managed to survive, wedged in between the mansions every few blocks, each one unique.  This painting shows the park that is at the top of a steep stairway down to the surf, a small wreath of jade-colored cacti with golden blooms, and waves of purple statice flowers, crowning the crumbling cliff.  Plenty of traffic even during pandemic, but on the edge of the sea the salt air is fresh and clean.  There is exactly one bench, but surfers apparently never sit on anything but a floating surfboard, which leaves that bench available for itinerant artists like me!

Surfers tote their boards up and down the steps with ease and grace, now skimming the foam, now plunging in and out of the waves.  As I watch, the color of the water transitions from chalcedony to turquoise to diamond, over and over, never the same…  Not coincidentally, those jewel colors are street names nearby!

I painted from my photo.  9 x 12″ Canson Mix Media sketchbook.  Watercolor first, nothing fancy, just trying to capture those jewel colors.  Then a sponge  (just a slice of an old kitchen sponge) on damp paint for some textures, followed by black ballpoint pen, more watercolor, a few white ink highlights.  Finally picked out the edges of the cliff and the “frame” with a blue 05 felt tip pen, and rubbed the edge of a colored pencil over that tuscan red plant on the right edge – no clue what the name of that plant is, but I’m pretty sure it’s a succulent…  Dr. Seuss would have loved it!