Today we decided to just “stay home” here in Lambeth and try to catch up with laundry, haircuts, and postings.

We stayed several days in Mannheim with our friends Marika and Vollker.  During that time we transformed their dining table into an art studio, with Ben (6) and Karla (4) and me having a grand time doing colored pencil works in spite of the language barrier.  Karla got fairly annoyed with me and Griff now and then – I mean, really, grown up people not knowing how to speak properly!  She forgave Griff though when he demonstrated that tickling is a Universal Language.  Although the art focused a lot on lions (which required a lot of roaring to get the message across as to just how scary they should look) and mice, I did find time to do one just for me of the roses.  Everywhere you look over here there are fresh flowers for sale – and very cheap.

On our final day in Mannheim, we went to the Luisenpark, a huge open park right in the city with small boats that followed a track on the lake.  They were slow, which allowed ample time for spotting turtles sunning on the rocks at the shore, and for being grossed out by the immense carp that came to the side of the boat and opened mouths the size of dinner plates to beg for treats…eew.  And I got to see storks in action, which really was very exciting.  Their eyes are really as huge as they look in my previous sketch, which I did from a photo that I thought surely had been retouched.  Every high spot in the park had an active stork nest, and some of them were even down stalking through the tourists on the lawn.  After the boat ride, everyone else went wading while I found a spot to capture the boats and the ubiquitous TV tower.  The towers remind me of the Space Needle in Seattle, every town seems to have one, some even with a revolving restaurant.  Scenic yet intrusive…

So that wraps up Mannheim, next post will be about our travels with Dieter in Koln.

We arrived in Mannheim via a Very Fast Train (I was almost sad the ride was over), where we were greeted by our host Vollker, who escorted us to “the parsonage” and presented us with a set of keys.  He and Marika, another of our German “daughters” who stayed with us years ago in Atlanta, share ownership of an old parsonage with two other couples.  It is a huge brick house next to a tall brick church, full of unexpected doorways and mysterious dark stairs, and a marvelous guest apartment where we stay.  These people are the ultimate example of advanced city dwellers – they belong to a car share, so they don’t own a car, they just check one out when they need it.  They take their children to school and daycare on bicycles equipped with the trailers like we see a lot at home.  They ride the trolley or trains when they need to, but mostly they walk to the local version of our Co-op, or the Farmer’s Markets, or wherever they need to go.  And just like every other German town we’ve visited, there is a marvelous bakery every half a block.  Oh, my pinching waistband… how DO all of these people stay so fit?  Hopefully all of the walking will make a difference?

Ursula and baby Simon are with us, so once the baby is asleep, we have the wonderful intellectual discussions we remember from when Ursula and Marika were teens.  Both women are now accomplished global professionals, parents, citizens of the world, and their perspective is so intriguing, so refreshing.  They partnered with men of equal intellectual standing, who share the family responsibilities joyfully.  All that and they’re all just such fun to be with!

I wanted to make a painting of the huge grape arbor that covers their patio/chourtyard; it’s a beautiful space behind the parsonage, below the church clock tower, almost completely roofed by a giant trellis full of juicy black grapes.  But as soon as I got out there, it began to rain.  Dang.  So I broke off a stem and brought it in the house, so instead of a landscape, voila – still life.  With “trauben”.

Labor Day back home, I hope the weather is cooperating as everyone relishes that last three day weekend of summer.   It’s raining and muggy here today, but the weekend was gorgeous.

We spent the weekend exploring Bavaria, first Regensburg on Saturday with Ursula and baby Simon, then Munich on Sunday with Markus.  Both days we enjoyed traditional lunches featuring schnitzel or roasts, with potato dumplings or potato salad, and Really Good Beer.  Light beer is called “Hell” on the menus, or “helle” on one menu… so in the college vernacular, I suppose I could say I drank hella beer?  That is especially appropriate since in a “real” beer garden, the only size beer available is one liter.  That’s a lot of beer… Markus and I split one.

Architecture.  Wow.  At the moment I’m feeling very much like this time last year at the Grand Canyon: I don’t know where to look.  I sit with my sketchbook and gape, so for now I content myself with pretzels and beer mugs and objects to which I can relate.

Cultural Differences.  Just in the course of describing moving her furniture from Berlin to Inglestadt, Ursula mentioned that when you move in to a rental apartment, you must install your own light fixtures.  The last tenants take theirs, leaving you with just the wires hanging out of the ceiling or walls.  Ouch.

Traditions.  What goes around comes around.  Leiderhosen and dirndl skirts are making a comeback with the 20-something set.  Our travels over the weekend took us past several local harvest festivals, with many such outfits in evidence.  The twist is that more often than not, girls are wearing leather shorts, and/or some pretty risqué reincarnations of the classic little blouse and vest.  Fun!

We’ve found accommodations in London, more on that later.  We’re looking forward to a few more days here, then on to other German locales. 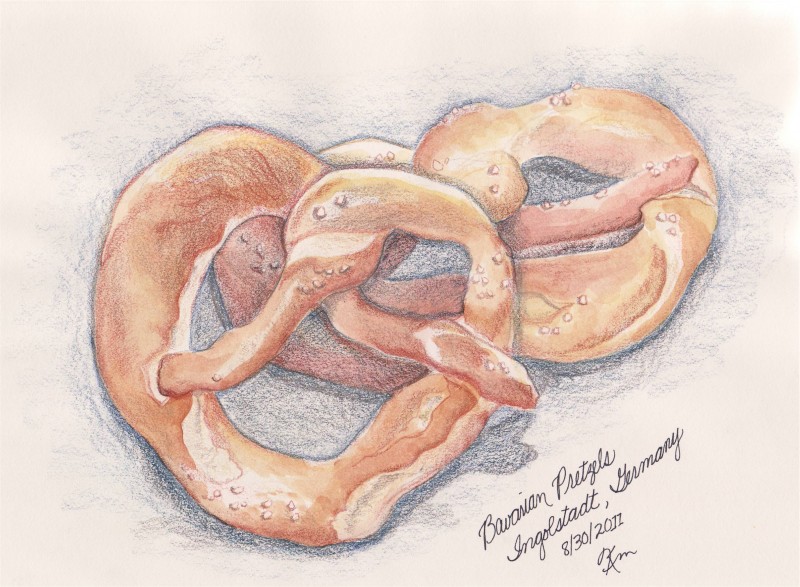