—That’s the joy of “crawling” for me – seeing what variety comes out of people’s hearts and minds as we all experience the same spots on the map in the same time frame. —

I was invited to lead a “Sketch Crawl” last weekend (Oct. 24) in the village of Oceanside, Oregon.  The term Sketch Crawl I think is an adaptation of Pub Crawl, the difference being that you’re not limited to pubs, but you do progress as a loosely-connected group as the day plays out, plying your art, eating, drinking and being merry.  It’s simply great fun!  And how does one lead a Sketch Crawl?  For this one, I shared a few of my sketchbooks, I showed a few tips and tricks I’ve picked up (mostly from Sketchbook Skool), I briefly demonstrated two of my favorite tools (china marker and waterbrush), and then we headed out to let the art happen.  Leading is less like an art lesson and more like a pep talk: “Afraid of that blank sketchbook page?  Try drawing a border first in pencil – and voila, you’ve started!  Or just splash on some watercolor in the basic shape of what you see…”

“View from the Blue Agate”, ink, by Kerry McFall

Tiny Oceanside (which is near Tillamook of Tillamook Cheese fame) offered a one-block strip of sketching opportunities, which included the Three Arch Inn (our launching point), the community center deck overlooking the surf, the Post Office, a fire station, and two restaurants. A few sandy steps down, and you were on the beach.  The “crawlers” included around two dozen folks, literally from ages 9 to 90, beginners to accomplished professionals, who came to enjoy the glorious weather (! yes!  in Oregon in October at the coast!!) and the company of other artists, even if they all weren’t quite sure what a Crawl is… 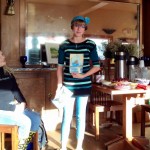 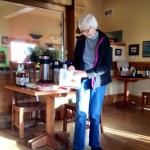 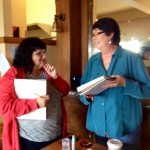 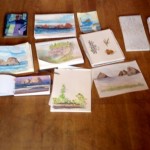 We spent the morning choosing a likely spot in the village, pitching our folding chairs and stools, and “arting”.   It was fun to spot the crawlers on the sidewalks and decks and beaches, and to look over their shoulders as they worked.  We re-grouped for lunch, most of us at the Blue Agate Café, then carpooled up the cliffs to Cape Meares.  It was breezy there, but we all found another couple of magnificent views to fall in love with.  Close to four o’clock, we returned to our starting point in the lobby of the Inn.  The Art Accelerated group who organized the event provided snacks and wine and tea and coffee, and I encouraged everyone to share the results of their efforts.

What accumulated on the floor of the Inn as we laid out our sketchbooks was exactly what I had hoped for: a wide range of styles, subjects, and media.  That’s the joy of “crawling” for me – seeing what variety comes out of people’s hearts and minds as we all experience the same spots on the map in the same time frame.  From houses on the hillside to morning glory blossoms, from the geologic marvels of the coastline to the ever-changing waves that sculpted them, each page was unique.  Each choice of color or tool reflected something about the artist and the day.  Judging from the glow on the faces of the participants, even the shy ones who protested they weren’t artists, it was clear that they were pleased to say they had been on a “sketch crawl”.