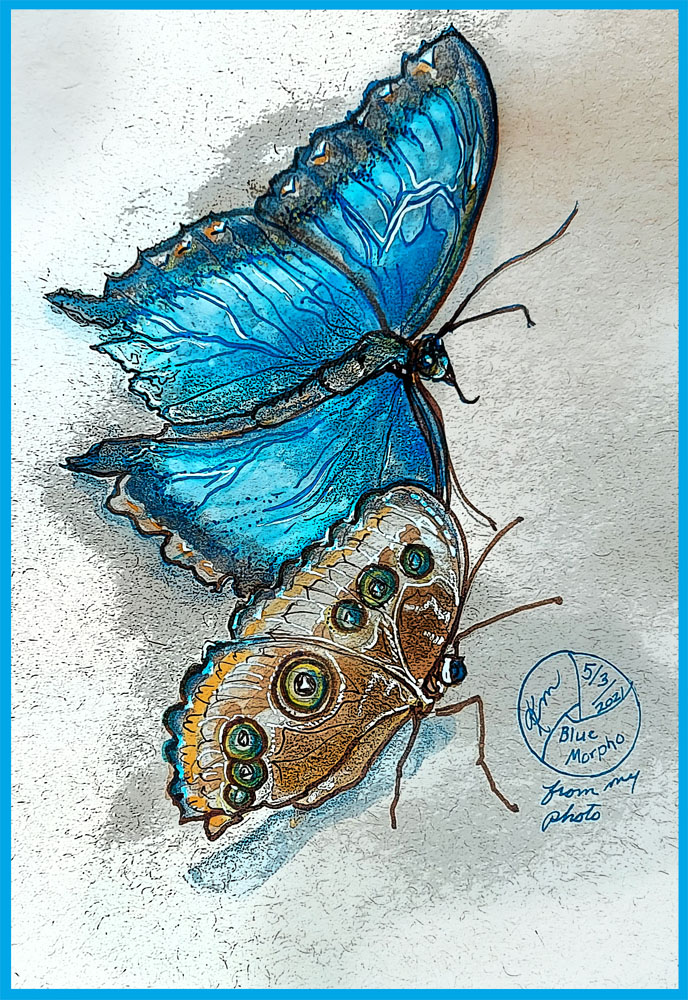 The San Diego Zoo Safari Park opens a special butterfly aviary each spring.  We were able to get a reservation in late March, and thus began my 2-month journey (so far) down a major Rabbit Hole.

The stars of the show were the butterflies, of course, fluttering by in breathtaking irridescent flashes.  But to begin with, there was a certain amount of red tape to get through, masking up, and waiting our turn to get through the curtained and carefully monitored entrance.  The first guide we met told us to be sure to watch where we stepped because the tropical blue butterflies were prone to sitting on the ground… only they were brown when they sat with folded wings, and very hard to see!  Huh?  We learned that the Blue Morphos weren’t really blue at all – their color comes from reflective scales on the top surface of their wings, which to our eyes are a mind-numbing sparkling blue!Blue!BLUE!  And the lower surface of the wings, which is mostly what one sees, look like something out of a guidebook on How to Look Like A Scary Multi-Eyed Owl or a Monster Brown Man-Eating Moth.  As we wandered along, guides were eager to answer our questions and point out where various flyers were likely to be seen.  Small tables had been set up along the path as “nectar bases”, which meant we could stand nearby and marvel.  My favorite photo from the day was what inspired the sketch above: one large blue beauty, exhausted, tattered and torn, lying open and flat out beside a smaller version of the same creature, but with wings primly folded shut, which if it was on the floor of a jungle would probably be invisible.

Once we got beyond the surprise of the Blue Morphs (native to Central and South America), there were other treasures to find amidst the foliage.  I was hoping to see Monarchs by the dozens, because we have seen precious few this year, but… there weren’t many.  I remember as a child lying under a maple tree in Klamath Falls, Oregon, watching Monarchs drink the sticky drips of maple juice off the hot sidewalks.  If I was very stealthy, I could smear some of the sticky stuff on my finger and they would crawl aboard until their tickly feet made me giggle and they fluttered away.  They were magical, but we all took them for granted… if living in the climate where Monarchs are native but seeing hardly any doesn’t bring home the reality that we are really messing up our Mother Earth, then what does? 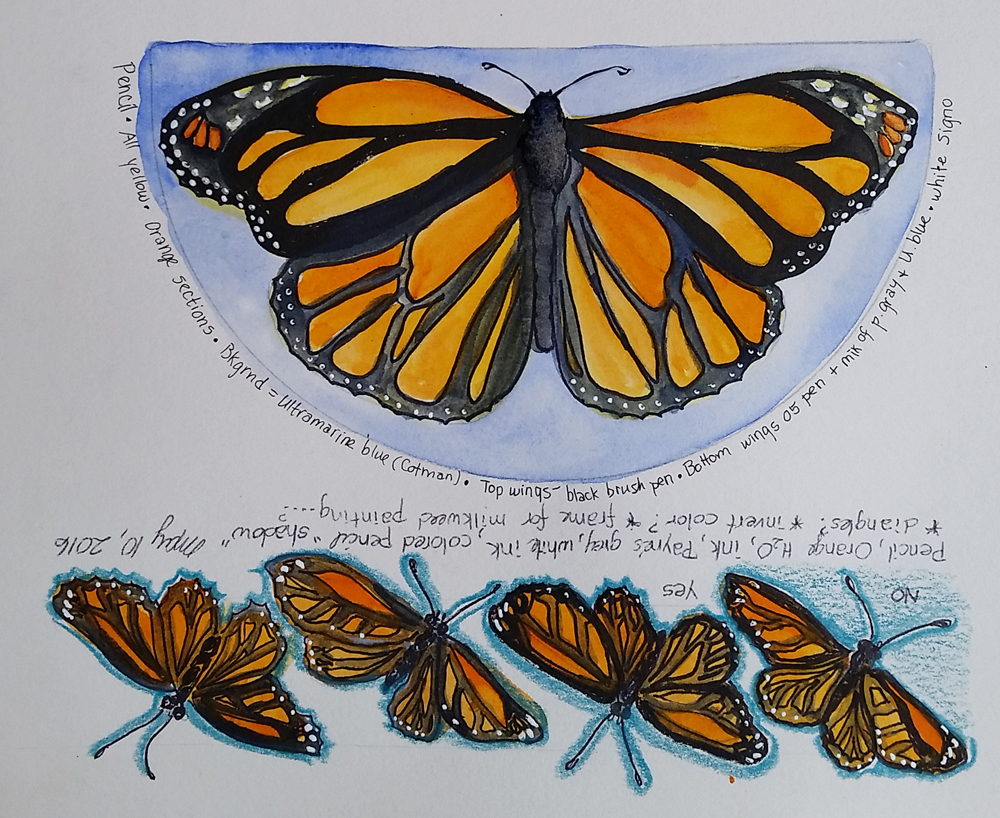 As we left the aviary, we were essentially “frisked” twice by volunteers making sure no butterflies were trying to hide on our persons to escape the enclosure… I can safely say I have never been frisked for butterflies before!  And then began the excursion down the Rabbit Hole…  I started researching blue butterflies, and butterfly life cycles.  Talk about magic!  At about the same time as the visit to the butterfly aviary, I came across a photo of M.C. Escher’s “circular design with butterflies” in a book.  My textile design fascination kicked in, and I started fooling around with my blue butterfly sketch in Photoshop.  Then came another sketch, more disciplined and scientific, and more fooling around with the imagery.  And then I started looking back through my sketches over time for other butterflies – fritillaries from last summer, a brilliant red cardinal from a trip to Ireland.  I’m still pondering what will be the next step with the art.  Just to be able to enjoy the process of painting and drawing, and to have access to Online Rabbit Holes, is enjoyable.  But I know there is so much more to be done to help the magic stay alive and flying in this crazy world.  Head for the Rabbit Holes, everyone, and maybe begin with “Native Plants for Butterflies”… 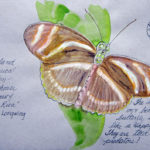 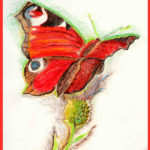 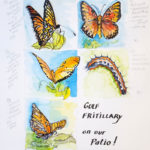 The flowers were not quite what I had expected up on Mary’s Peak on the Fourth of July, but the orange butterflies made up for that shortcoming.  They were everywhere, especially near the parking lot.  Dandelions seemed to be the flower of choice, at least in that vicinity, no doubt sprouted from invader seeds stuck to shoes and tires.  I need to research the butterfly name – Hey, Ralph, does this look familiar?

This sketch/painting wasn’t quite what I had in mind when I started, but it’s colorful and I think I’ll use the background patterning approach in another attempt, maybe not of this particular butterfly but in something soon.  The first glitch was a new “sepia brown” brush pen – the brush never did limber up, and the ink was essentially dried up from the get-go, so I tried to go over the dark spots first with another pen, then purple pencil, then black ink, and finally a brown pencil.  Overworked.  But I love the lacy wing edges, so I’ll use variations on those patterns again.  The triangle motifs remind me of Africa!  Hmm – I wonder if they have dandelions in Africa?