We tumbled into the boat panting almost as soon as we arrived at Chobe Lodge, anxious not to miss the afternoon tour.  I looked skeptically at the large boat, the bartender, the people with camera lenses as long as my arm, and thought, “Well, it’s all part of the experience.  Any wild animals will be miles away.”  But my skepticism vanished almost immediately.  There across the river, in the lush spring marsh, was an IMMENSE elephant, munching away like one of Aunt Audrey’s milk cows, oblivious to our boat and several other smaller boats.

And that was just the beginning.  The lone bull elephant was our first sighting of what are known as The Big Five in Botswana, big five as in Really Big Animals Who Look Prehistoric.  Wow.  Even the loud/drunk South African pig farmer on our boat (reminded me of a Dutch rugby player I dated in college) couldn’t diminish the experience.  Magical.  Unforgettable.  So magical that I didn’t even try to sketch, I just took photos with my tiny camera, knowing that sooner or later I would be back here in Oregon watching the rain and loving the intensity of fond memories as I sketched.  So here he is, with his personal entourage, which at some point I will research to figure out what these birds are and why they were following him… elephant poop hors d’ouevres perhaps?

It struck me as ironic today that I was sketching lions who live in Botswana, where high summer is about to take over, while watching snowflakes drift past my windows…  The above is a photoshop combination of two studies I did this afternoon of my favorite lion photo from our safari last month.

The two lionesses were young adults, and had clearly just gorged themselves, probably on an old bull buffalo that we had come across about an hour before… poor old guy.  Their bellies were “tight as ticks”, as my grandma used to say, and although they were clearly interested in something in the distance, they were too full to move.  Beautiful creatures, unscarred, oblivious to us in our “jeep”.  From what I could gather, if you stay sitting down in a wheeled vehicle, they don’t notice you – vehicles aren’t edible as a rule, and they simply don’t give a rip about any predators since they are at the top of the food chain.  If you stand up, though, anything on legs just might look like prey.  Yikes.  This could be crucial, given that the jeeps were essentially just like the Disney Indiana Jones ride vehicles, same non-existent shock absorbers, nothing resembling windows or doors, but sans seatbelts.  So we stayed sitting down.

I’d like to do a larger painting of these ladies at some point in the not too distant future.  But first I need to study lions a little more –  I was surprised to discover for instance as I did the eyes that lions do not have pupils like cats.  Lions’ pupils are just round like people pupils, not almond shaped like a housecat.  Who knew?  It doesn’t take much of an arch to an “eyebrow” or a slant to an eyelid to make them look absolutely evil.  But their big puffy ears are like teddy bear ears.  And their chins are fuzzy… and in this case, slightly blood-stained.  Eww.

Woke up with aching joints like home… no wonder, it’s finally raining!  This is the “rainy season” they tell us, but we’ve been here 12 days and this is the first Pula we have seen.  In the Botswana language, Pula means Rain, Life, and Money, all in one.  It’s also what you say instead of good-bye, wishing for rain for the future.  Very astute.

Mostly I’ve been “arting” with the kids since we arrived in Botswana.  That’s what Masego calls it – it’s the all inclusive verb for painting, drawing, using markers or crayons, whatever – as in, she sees a flower she likes and trills, “Grandma, let’s art it!”. 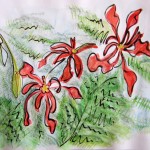 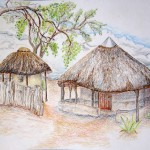 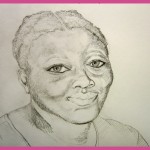 As we said goodbye to London, I put together some of my mental “snapshots” into this:

Farewell to London by Kerry McFall

We will miss the thrill of the Big City, the different flavors of the neighborhoods, the people we got to know.  Thanks to everyone who helped us have such a marvelous couple of months!  Here are a few of my London sketches that didn’t get posted in the rush of heading to Botswana:

I have been closely examining my impressions from  these last few months, in terms of art specifically, and in terms of life, the universe, and everything.  (Have I left anything out?)

The art I have studied has been humbling, overwhelming, and inspiring.  More than once I was sure my head and my heart would explode.  The Victoria and Albert was my favorite museum, and I barely scratched the surface there.

The art I have made has been exhilarating, satisfying, and I remain very humble.  More than once I considered investing in companies that make erasers.

"Close but no Cigar," pencil and chalk, by Kerry McFall

Sketching in the many places we have explored,  I gained an appreciation of the value of the classical Western methods of learning art – here is the technique, here is the masterpiece, look, draw, repeat, look, draw, repeat.   Just like a young athlete repeats the critical motions over and over, until muscle memory takes over, then begins to experiment with variations, tweaks, and subtleties, so a middle age artist repeats and experiments.   Some of the motions are already second nature, and some of those must even be unlearned.  But the exhilaration of learning is almost enough in and of itself.  The going is as good as the getting there.  The joy is in the process.  I haven’t been able to post many sketches recently, but for every one I’ve posted I have a dozen others that I like and two that I don’t like and one I have jettisoned.  Here are a few more.

London, we will miss you.

Last week we flew in to Botswana , where we are finally thrilled to meet our Botswana “grandchildren”, Wedu and Masego, and are enjoying a very warm welcome (not just the weather)!  We have seen “the Lands”, where the family has started a farm with avocados, mangos, and oranges, and where the sound of cowbells drifted in from the bush.  We made a quick car tour of Lily’s home village, where a child on the street pointed at us and laughed the Botswana equivalent of, “Gringos!”  So far the major “wildlife” visible as we travel through this capital city of Gabarone are the random herds of donkeys, goats, and brahma cattle that wander along the shoulders of the four lane highways, thoughtfully munching on thorn bushes as traffic mostly manages to avoid them.  Thus does village life get overtaken by urban development – eventually the livestock will disappear from the highways, but for now they are tolerated or at least ignored.  It’s too hot to bother chasing them down, and I suspect they provide a good income for the auto body repair folks!

We leave in a couple of days for a week long safari….  Looking forward to drawing elephants…– and lions… – and maybe even the crocodiles of the great green Limpopo River!