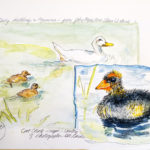 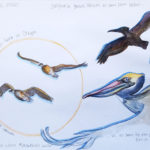 It’s been a little over a year since I posted here.  I’ve been painting and drawing this whole time, but life got complicated.  After the end of cancer treatments, a major relocation to California, and a couple of surprises including pandemic pandemonium, I’m going to try to pick back up here with my art and stories. Down the street a ways, there is a tall fence where the morning glory pours over the top like a waterfall.  I love the riot of color, and I recently noticed (because what else is there to do when your favorite beach boardwalk is closed?) that the vine has two completely different types of leaf.  Pretty sure that’s not possible I told myself, so off I went down Uncle Google’s Rabbit Hole and sure enough, there is such a thing and it’s called Ivy Leaf Morning Glory.  It has the expected valentine-shaped leaves, plus 3-pronged ivy-ish leaves.

I enjoy reading how other artists achieve their special effects with different media, so I’ll try to remember to include these notes.  For this painting I used some of the leftovers from our move: two types of plastic shelf liners, one with parallel grooves and one with a lot of little holes in a pretty random pattern.  I painted the areas where I wanted the texture, placed the plastic over it, covered it with a book to weight it down, and left it to dry.  Once it’s dry, I sometimes paint over it, draw over it with ink, or shade it with the side of a colored pencil.  The pencil technique seems to bring out the edges of the textures.

Turns out the holey one wasn’t the best choice for a sky area, but I think it could be nice for shady forest backgrounds, and I like the parallel effect for wood grain.