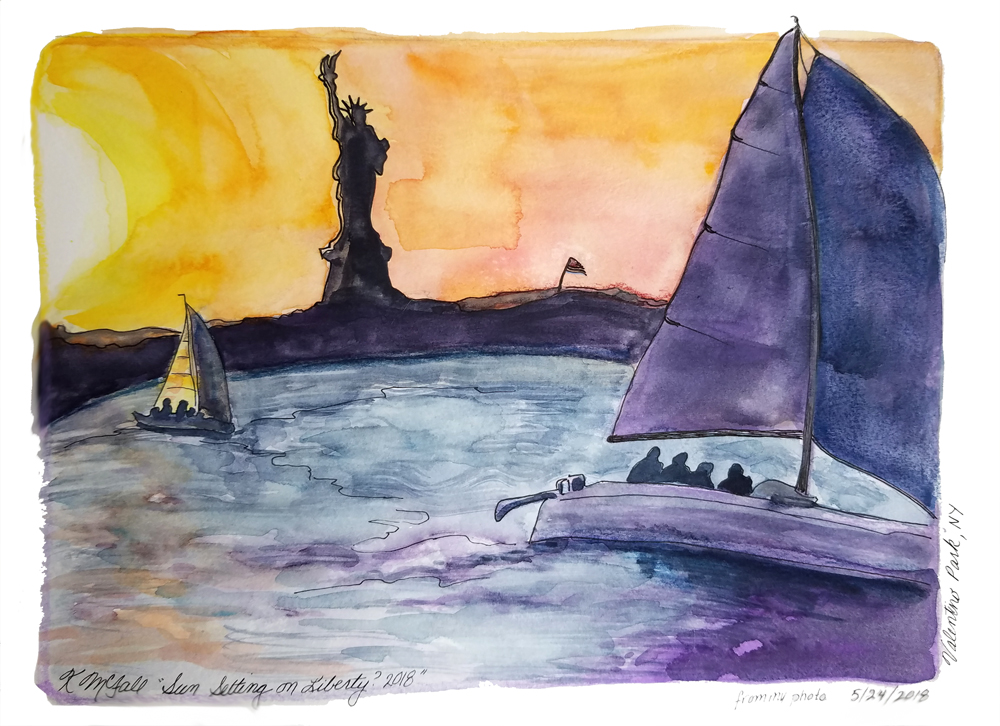 “Sunset on Liberty?” by Kerry McFall

Are we watching the sun set forever on the principles behind the Statue of Liberty, the “New Colossus” who encouraged the world to give her their “tired, their poor…”? Or was that all just another American myth, something that we believed because most of us hadn’t ever seen very much to contradict it?

We who call ourselves American, with the possible exception of the Native Americans, have ALL benefited from the melting pot.  Sometimes it took  a lot of heat for that pot to bubble, but bubble it did.  My own ancestors have been quiet about where we came from, who we were before we were “American”.  I have always wondered who among them were escaping more than famine or oppression.  Some admitted to being Irish – hard to deny with all those Mc’s in the mix.  One grandfather used to say we were Railroad Irish and Black Dutch – but he couldn’t tell me what that actually meant.  Looking at bone structure from the perspective of an artist, I would say that somewhere along the way there were encounters with Cherokee or Chinese, but maybe that’s just what Black Dutch meant, Dutch Indonesian perhaps?

None of those groups were welcomed with open arms from what I can gather in the history books, but they struggled and mostly succeeded.  My family, and my husband’s, worked their way from migrant laborers, to farmers, to blue collars, to white collars, to professionals. They served as soldiers and sailors, and as Rosy the Riveters. They realized the American Dream because they worked hard, but they couldn’t have done any of that if they had been imprisoned, or walled out, or if their children had been separated from them when they tried to enter.

And that is the ultimate inhumanity, to take children away.  WHAT ARE WE ALLOWING?  And all for the almighty dollar?  The danger is not at our borders, the danger is in our board rooms, and in our executive offices.  I’m sure there are and have always been desperate criminals seeking asylum here – is this new immigration insanity an admission by Homeland Security that they can’t tell the difference between a drug lord and a farmworker?  I believe that most potential immigrants just want to work and be safe, and the criminals we should truly fear are those already in this country whose conceit is such that they don’t fear anything or anyone, and the only God they worship is money.  I refuse to believe that the melting pot can no longer be effective in creating a livable society.

It was coincidence last month that I happened to be in Brooklyn at the waterfront on the very night that was predicted to be the “perfect sunset” behind Staten Island.  It was coincidence that there were flotillas of elegant sailboats backlit by the fading light.  It took my breath away, and made me very, very sad.

We are better than this, America – it’s way past time to throw the true Rascals out.  Let them go live where they launder their money.