Mabel gazes steadily out of the sepia haze of 100 years ago, eyebrows arched.  Her dog leans against her, intense, suspicious, ready to defend.  There she is in her Sunday Best, standing in what seems to be a patch of thistles, almost grinning, and yet her eyes are somehow sad.  She looks cold to me, like the wind is blowing and she’d rather be indoors. 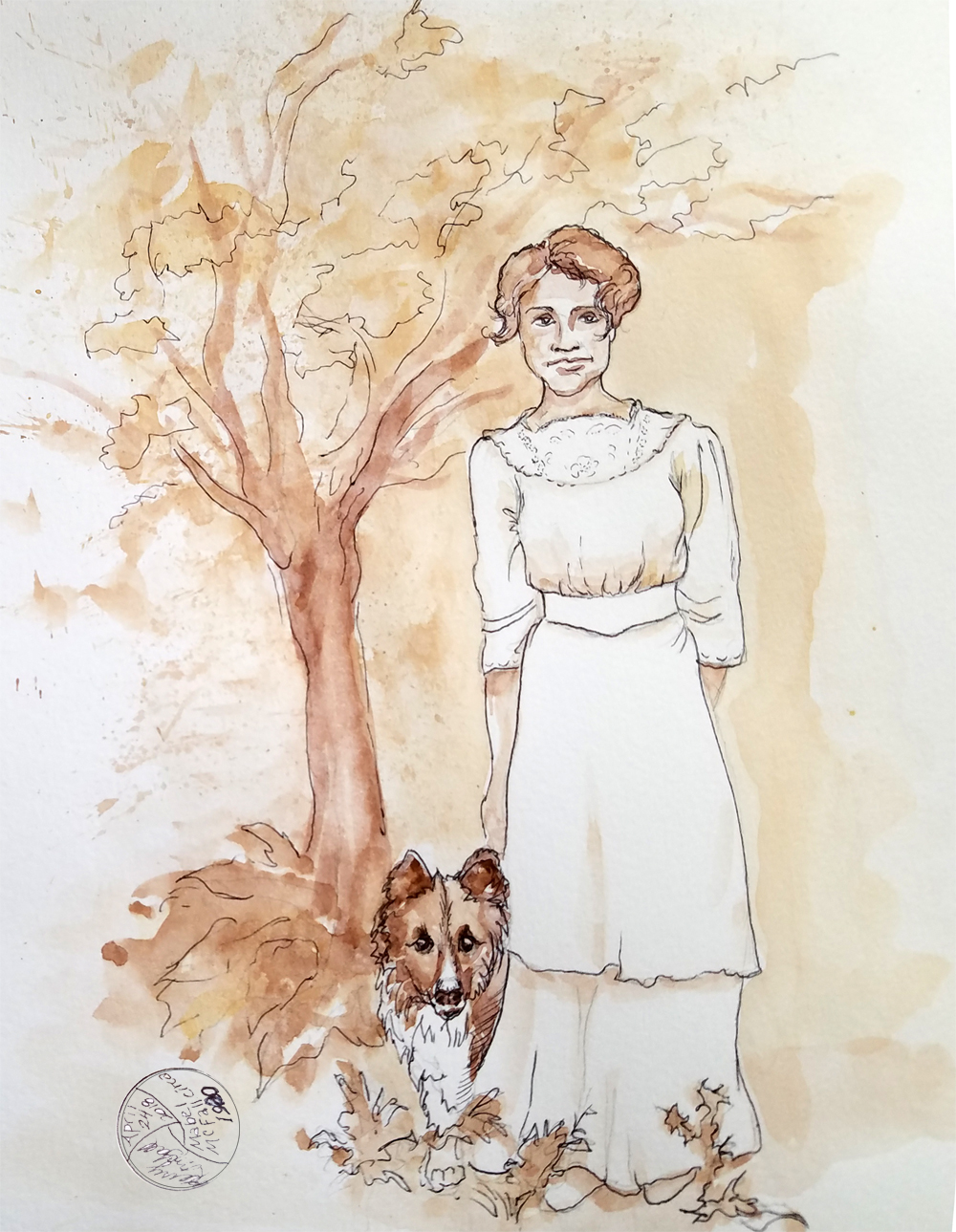 What shall I do with you, Mabel?  You and all the other intriguing ancestors, recently emerged from your cocoons in my mother’s house?  And what shall I do with your story, Mabel, not just your image?  I only know a bit about you, that you were the darling of my grandfather’s family, and that you died young, shortly after you were married (shortly after this photo in all probability,) poisoned accidentally by your mother-in-law’s potato salad. 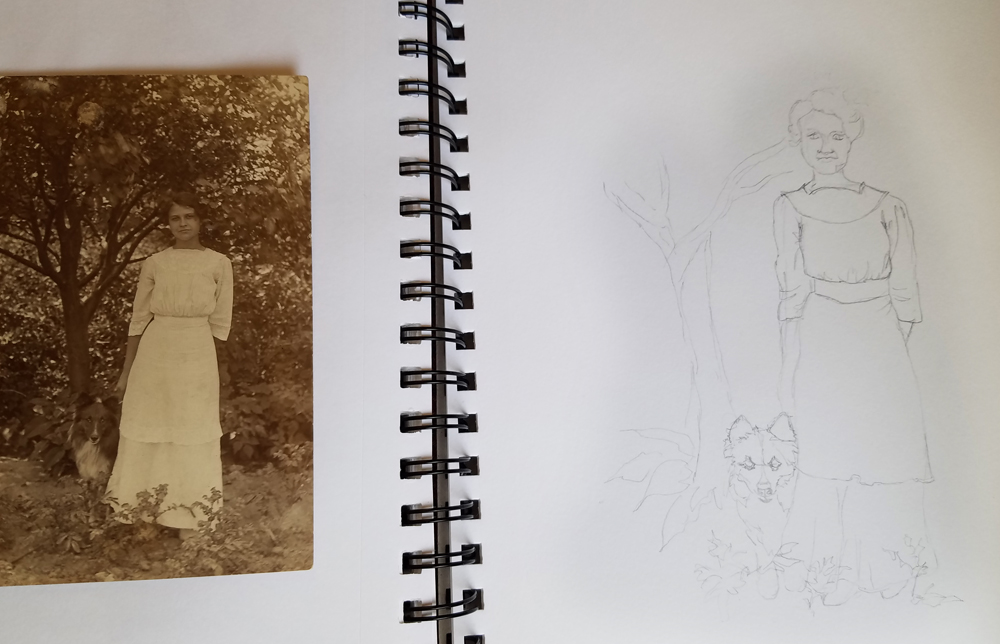 Mabel’s generation’s portraits, in their embossed and gilded leather or cardboard folders, don’t take up much space.  And there aren’t very many of them.  But they are just the tip of the iceberg in my bedroom.  The next layer in the huge box of photos is a couple of albums with black and white glossy photos glued in with tiny black corner holders.  Then come the albums with plasticene pockets holding “color” prints in various stages of fading and warping.  Next up are several manilla envelopes filled with streaky prints from my grandmother’s ubiquitous Polaroid, followed by a dozen huge fancy albums bulging with color prints of faces I recognize.  As I finallly dig down to the bottom of the box, I realize how glad I am that my mother did not succumb to the scrapbooking craze. 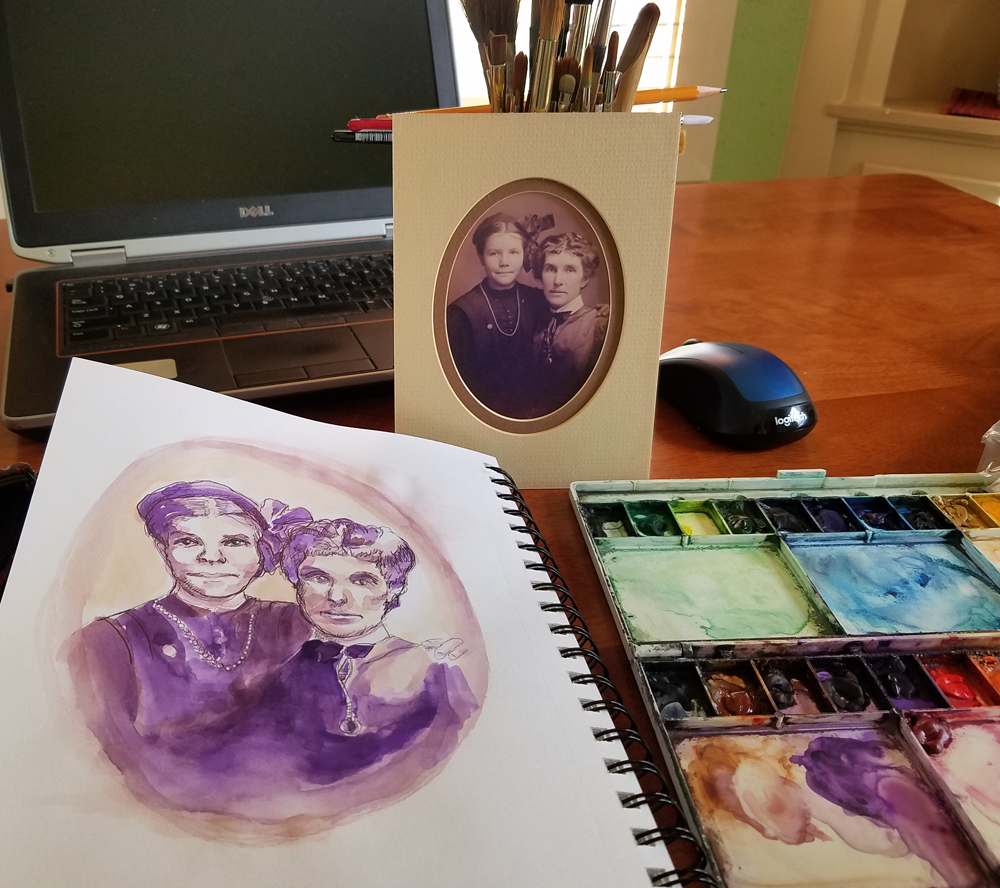 That’s just my piece of the family photo iceberg.  Somewhere in a garbage dump nearby, there are my Dad’s jerky video tapes, which no one can watch anymore because who has a VCR?  My daughter-in-law occasionally publishes a glitzy hard back book preserving their digital photos – she must have dozens by now.  Cameras that aren’t mounted on drones or squirrel collars are So Last Century, but everyone has a cell phone, and as a result all of us have multiple hard drives and/or “thumb drives” tucked away in our sock drawers, filled with digital images we will likely never look at again.   I haven’t even touched on the current phase of rampant technological contagion, where social media stored in the “cloud” adds another dimension to the imagery and the stories behind them.  What on earth shall we do with it all?

So there you have it, a brief archaeology of amateur photography, a frozen layered history of unintended volume, now stuffed into in our collective closets. I don’t know yet what I’ll do with my personal historical iceberg.  Draw and paint from some of the more intriguing portraits for starters.  Ship some off to unsuspecting friends and relations.  Start a bonfire with the rest?  I’m open to suggestions – got any?