I can’t decide if I would like to be a fly on the wall in the Whitehouse these days, or if that would just make me want to hand someone the fly swatter and put me out of my misery…  The imagination boggles at what must have been said and done “backstage” in those hallowed halls over time, the ultimate “behind the scenes” locale.  But now?  Can it get any weirder?! 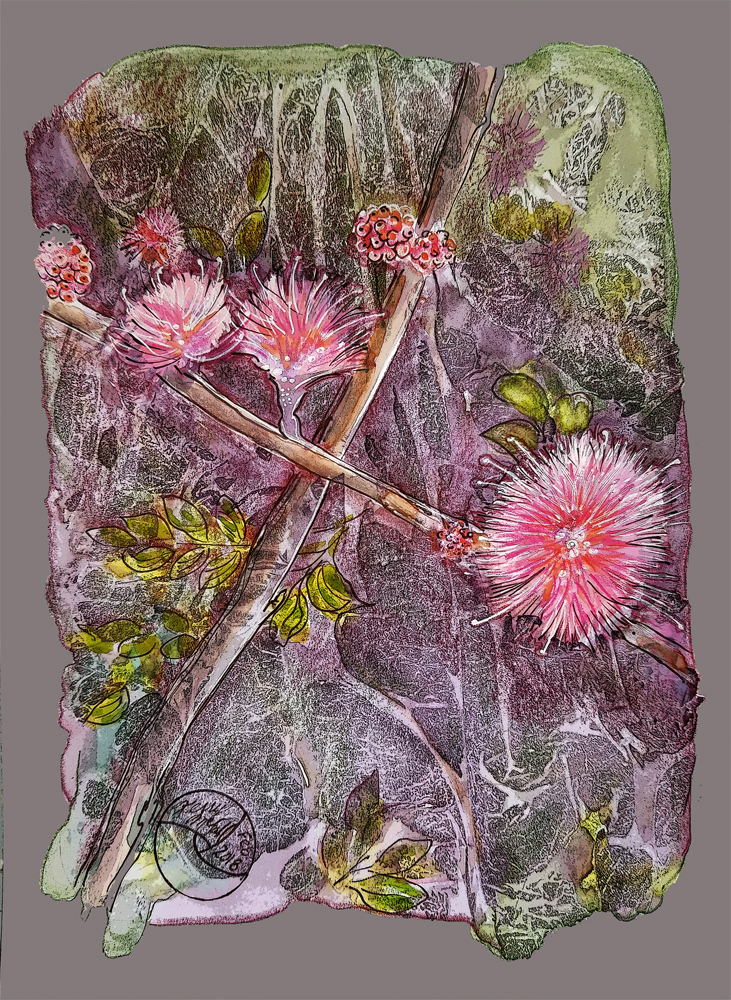 As I worked on this painting of a mysterious Seussical flowering shrub, I was thinking a lot about what goes on behind a scene, any scene.  Backstage in a play, literally behind the scenes, is a beehive of activity: actors rehearsing lines, politicians making up excuses…  Backstage in an artwork, i.e. in the artist’s head, is a circus of squirrels (which is pretty much what I’m thinking is going on in DC as well… ) At least that’s what it feels like in this artist’s head as I wrestle with how to manage the background of a watercolor floral.

A background can’t be too detailed or it will take over the composition entirely – I still want those crazy flowers to be the focus of attention.  But it can’t be boring either, or it will overlay the whole work with a big “Ho Hum”.  Then again, too much fuss in the background also takes a lot of time to get on paper or canvas, time that could otherwise be spent getting started on the next work of art, and life is getting shorter by the day.

So what to do?  My latest solution is plastic wrap.  I’m about to get the hang of it: do a quick watercolor wash suggesting colors in your major shapes, and major areas of dark and light, then lay plastic wrap over it while it’s still juicy and wet.  Push and pull the plastic around until it looks interesting, then go empty the dishwasher or water the houseplants.  After it’s dry, pull off the plastic and let the Squirrel Circus begin!  If it needs to be darker, get out your colored pencils and drag the side of the leads over the paint.  This will darken the “veins” formed by the plastic-channeled paint, and pick out any texture that was laid down as well.  Pen and ink, more watercolor, maybe some markers, et Voila!  Well, not quite voila at that point – I also did a few manipulations in Photoshop, trying to reach the same brightness and contrast as the original.

Here’s another example of the plastic wrap approach, although a bit less fussy than the one above: 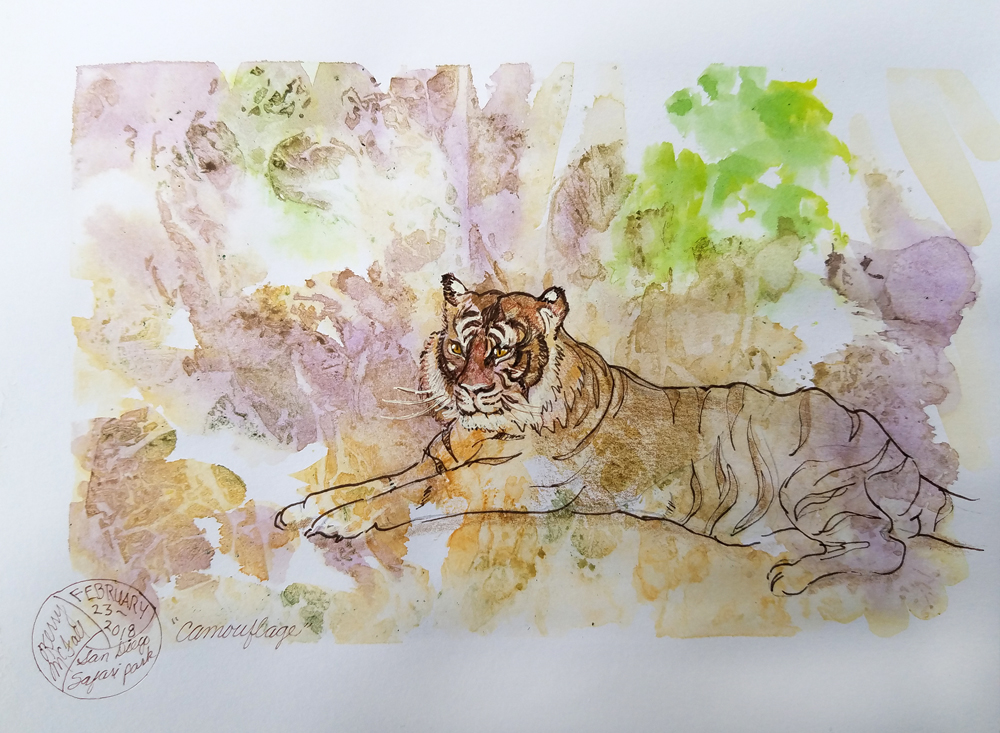 This tiger was so complex, and yet he blended so nicely into the surroundings in his enclosure at the San Diego Safari Park.   Clearly all the emphasis needed to be on him, yet he couldn’t just be floating in white space.  I didn’t really want to ink in all those stripes though… so I didn’t.  I focused my efforts on his expressive face, and simply suggested the rest of his body and some strips with a few lines of ink.  He just kind of goes invisible as your eye moves off the page to the right.  If I had it to do over, I’d make that green blob up top not as bright – it must have dried before I got the plastic on.

An earlier (and less effective) example of the plastic wrap technique is in an earlier post on https://www.gallerynouveau.biz/index.php/2017/09/seussical-inspiration-cornus-kousa/