Finley National Wildlife Refuge, especially in these quiet few days at the end of a long, hot summer, provides a calm not quite like any other.

Yesterday we saw where Invisible elk have left their hoofprints in the newly plowed soil at the edge of the dike, seeming to appear out of nowhere and slip back in to impossibly narrow tunnels in the brush. 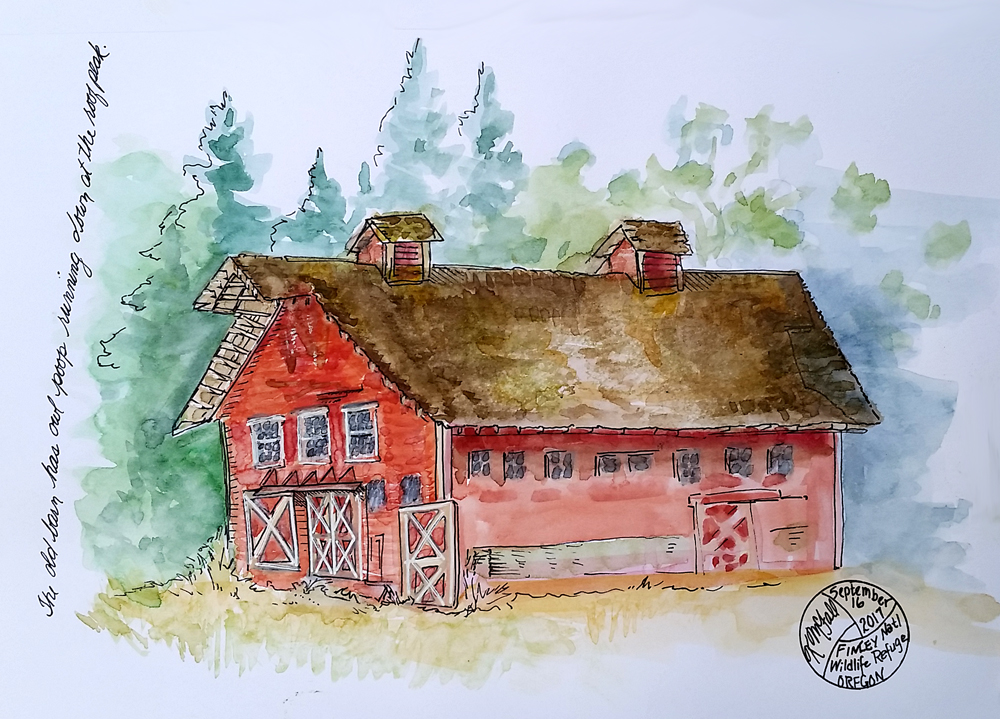 The old barn is still standing against all odds.  I sat for several hours, completely focused on counting window panes and trying to get that red just right. The roof, once a tidy expanse of wooden shingles, is a living surface, moss upon moss upon lichen, thick and undulating, brightly colored orange and gold molds topping off green and copper and deep chocolate layers.  Owl poop – or is that swallows? – drips down the red siding of the sheltered roof peak.  I could justify the wonky perspective in my sketch by maintaining that it’s a saggy old building, but that would be cheating… the wonkiness is primarily my failure to understand some architectural basics!  Lessons learned!

Beside Cabell Marsh, Chickadees call softly to each other.  Great Blue Herons stare into their lonely reflections on the surface of the pond… and just as you feel yourself relaxing into a nice little Zen stupor, one of them bellows hoarsely at the world for no apparent reason and makes you jump and squeal.   What is that noise they make?

Lazy carp seem to wave from the middle of the pond, big fins sticking up from the shallow muddy water.  Swallows flit and twist above the surface, sometimes scooping up lunch with small sprays dripping back.

The geese have not arrived.  Unlike the rowdy OSU students due back to town this weekend, I so look forward to the arrival of the geese every year as they sing their way back from the far north.  Four ducks apparently stayed the summer.  Many more will join them soon.  Our day of wandering and relaxing ended earlier than planned as smoke drifted in from wildfires up north and out east… I hope the geese aren’t delayed or harmed by the smoke, but how can they not be affected?  The rains arrived this afternoon, perhaps that will put things right in the Pacific Northwest, perhaps nature can restore herself yet again.  Here’s hoping.