Posted May 8, Mother’s Day, 2016 by Kerry McFall    I am a fiber artist, a painter, a sketcher, a teacher of “arting”, and a mother.  My son Ben is a mural artist/film afficionado whose Instagram handle is @blankspaceremoval, and my daughter Corey is a designer and costumer whose surf coverup business is www.sharknaked.com.  I’m indulging myself by musing on Mother’s Day about what it’s like to be the artist mother of two artists… and the stepmother of two more artists – Aaron a photographer/web designer in Ireland, and Larsen a film director in Tennessee. 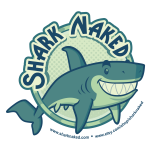 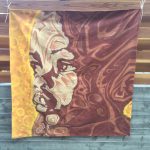 For one thing, while Ben and Corey were growing up, I could never put my hands on a pair of scissors.  Corey and I are left-handed, husband Griff and Ben are right-handed, which further complicated the scissor issue.  Griff got so tired of hearing, “WHERE are the scissors!?”  that for Christmas one year he ordered for each of us a pair of scissors with our name engraved on the blades.  Once Corey began to sew in earnest, she really understood the desperation, and she squirreled away her precious left-handed fabric scissors so that even I had to beg to use them. Some things never change; the only scissors readily available at the moment are Griff’s, and I’m pretty sure they’re in the silverware drawer… Finding a decent paint brush or a marker was equally challenging.  Sharpies vanished as quickly as dust bunnies piled up in the corners.

The Art Gallery on the refrigerator door was always a riot of color and craziness.  Still is, only now the crayon masterpieces are from an assortment of grandchildren and honorary grandchildren, most of whom are at the age of joyful scribbling with wild abandon.

When we down-sized several years ago, one of the hardest decisions was what “kid art” to keep, and what to recycle.  As they grew older, their art got bigger, and so did mine, and now we have U-Haul storage boxes in the attic filled with gowns and coats and costume bits, and palettes and plywood and canvases in the shed, and shelves spilling over with sketchbooks and quilts and fabric cuts…  such a jumble, but impossible to part with so far.  (We keep fooling ourselves that someday they’ll come and retrieve their stuff!)

As Corey and Ben move deeper into this millenium and adulthood, I marvel at their positive energy and ideas, at what comes out of their hearts and minds.  My own energy waxes and wanes, and I scale back my own projects or work in new media to adjust to the Big Momma of Us All, Mother Nature.  Big heavy wall hangings can no longer be my thing.  Lovely lightweight paintings or collages are more the ticket, as I condense my “studio” into one big shoulder bag.

A lot has changed in the world since I became a mother and an artist, but the phrase “starving artist” is still tossed around casually, as if being poor is to be expected if you take the path of an artist.  The older two sons have morphed the artistic piece of who they are into businesses where they can make a living, which is gratifying.  As for me and Ben and Corey, we’re still working on that, which means that we spend a lot of time and energy on projects that give us “great exposure” but not much money.  We’re stubborn, though, and persistent, and our love of a creative life keeps us going and makes us happy.  We’ll just keep arting along until we finally make it to Rich and Famous.  Hey – It could happen!  Okay – well, what about prosperous and fairly well known?  Works for me!