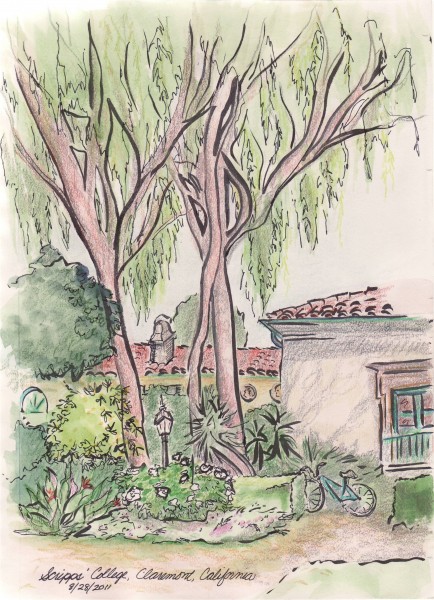 Last Saturday we navigated what’s left of the California freeway system from Sacramento to Claremont in a car crammed to bursting with Corey’s posessions and our travel gear, Corey continually reminding me that holding on to the car door does not make a bit of difference as to whether or not the idiots in the next lane will stop careening along so crazily.  At one point it reached 113 degrees fahrenheit as we crept along in 7 lanes of traffic at 20 mph.  Evidently, a paper bag over my head and a bottle of wine are the only way for us to survive those freeways.

Griff and Corey unpacked her things and schlepped them upstairs to her room, while I spent a hot hour under a white tent on the lawn, my feet and ankles being nibbled by unseen insects, sketching the outside of her dorm and drinking in the scent of oranges ripening on the nearby trees.  The outside looks like a Mexican villa, the inside looks like Harry and Ron and Hermione should be arriving at any moment down the chimney of the Common Room.   A glorious place for what Corey termed her Last First Day of School as she begins her senior year.

I am writing from Ingolstadt, Germany, safely arrived with our dear friends Ursula and Markus and Baby Simon.  But I want to record the journey in order, so stepping back a few days to put first things first.

The first “leg” of our journey was Albany to Sacramento on the Amtrak Coast Starlight. I love train travel! We arrived at the Sacramento depot at 6:00 a.m., where we waited for Corey to pick us up. The architecture is elegant simplicity, curves and arches, marble and stones, with a huge mural from the WPA project era at one end. The fittings have endured – wooden benches, wrought iron chandeliers, cast iron door handles. Decoration celebrates every detail without being fussy. Why is it we can no longer put together such pleasing, enduring projects to keep artisans employed? Surely we can… Dear Congress – think WPA!

Even early as it was, the train coffee was strong, so I drank enough of it to be able to focus and sketch. I tried to convey the incongruity of the architecture as a backdrop for the garish plastic signage advertising the new do-it-yourself ticket machine, so out of place at such an early hour…